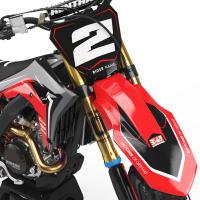 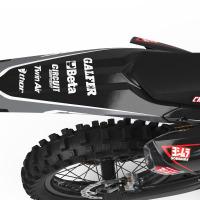 If you selected Honda Mx Graphics from our list you should know:

Customise Your HONDA mx graphics kit:
– Name, race number, logos and color change is free of charge;
– We have all industry logos and can also use your sponsor / race team logo or text.
MoreLess

Turnaround Time:
– Work begins on your graphics after a cleared payment is received;
– Within 2-3 business days a .jpg picture with a design is emailed for proofing, if you opted for Design Proof;
– Nothing will be printed without your approval;
– Production takes up to 3 business days after the design approval.

Every year it seems Honda motocross manages to top themselves when it comes to delivering both value and performance. With their status in off road bikes already firmly established you’d think they might rest on their laurels for a few years. But they seem as driven to create powerful, impeccably balanced machines as we at OMX are to deliver beautiful, state of the art Honda Mx Graphics for those dirt bikes. Whether you explode out of the gate to claim that hole-shot or are caked in slop after being roosted by the rider in front of you we have the Honda Mx Graphics that will let you shine through. Our semi custom graphics allow you to start from a rock solid design foundation and then add individual touches that make the look entirely yours. We’ve been at this for a long time and over the years have continually broken new ground when it comes to materials and the production of Honda Mx Graphics. Like Honda, we never rest on our laurels because we know that times and tastes continually change.

Please find out how to instal dirt bike graphics here

There are no reviews yet.